During the 1970s Penguin published five books by the esteemed German author Günter Grass. These books were produced during the reign of art director David Pelham, and they share the class and polish of so many Penguins of that period.

Günter Grass was a popular literary novelist who later won the Nobel Prize for Literature, for his “frolicsome black fables that portray the forgotten face of history.” His most famous novel was The Tin Drum, published in 1959 and made into an Oscar-winning film in 1979. Like other Grass novels it covers the Nazi era and how ordinary Germans dealt with it.

The first thing you notice with these Penguins is the burnished gold background which gives the books a feeling of prestige and physical presence, especially when the book is held in the hand. It was a suitable gesture by Penguin for the future Nobel laureate. They are like the gold Benson & Hedges cigarette packets from that time which marketed values of wealth and class.

The titles are set in large Bodoni, and contrary to standard procedure for capitals they are packed together, “close but not touching”. The effect is classical and contemporary at the same time. No cover designer is credited so we can’t be sure who set the type and chose the background colour (Grass himself or David Pelham?) but the small illustrations were made by the author. They are taken from the jacket designs he had done for earlier editions of his books (see below). 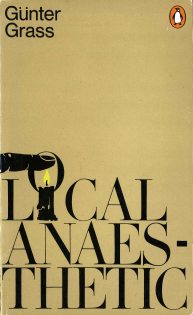 Günter Grass was an accomplished visual artist as well as being a major author. Following the Second World War he had begun training as a stonemason and studied graphics and sculpture at the famed Kunstakademie Düsseldorf. For a time he worked as a graphic designer. Grass kept up his art practice and held exhibitions through the years. He developed his own iconography, often based on motifs from his own literature. He said, “I often turn to drawing to recover from the writing.” You can see his work from the 1970s, the decade of these Penguins, at the Steven Kasher Gallery website. 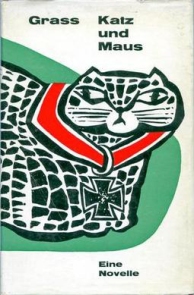 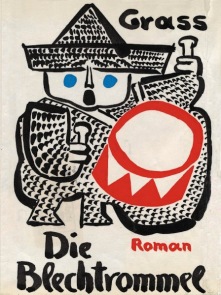 Günter Grass illustrations for early editions of his novels. 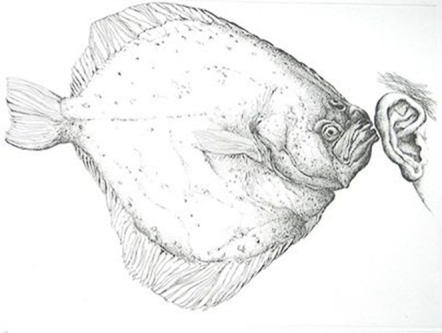 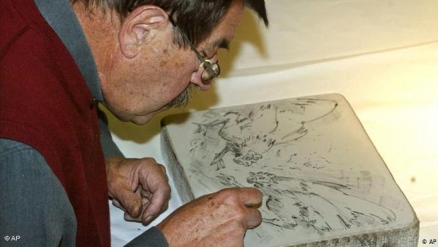 Günter Grass at work on the lithograph stone.

One thought on “Günter Grass, author and artist”